The Republic of Venezuela is the sixth largest country in South America, but in variation its landscape rivals that of the much larger countries like Brazil and Argentina. In fact, comparing its geography really doesn't do it justice: the country is simply unique. Anyone who has ever seen a tepuis rising above Venezuela's Gran Sabana can testify that there's nothing really like it, anywhere.

Venezuela lies at the northern extreme of South America, bordered by Colombia to the West, Brazil to the South, Guyana to the East, and the Caribbean Sea to the North. In all, the country is just over 900,000 square kilometers and divided into 23 states. Its borders seem to hold all of South America in miniature: there are fine stretches of the Andes, huge areas of Amazonian rain forests, fertile plains known as llanos, miles of Caribbean shoreline, and even a small desert. The nation also has a few geographical superlatives, including the world's highest waterfall and South America's biggest lake.

Venezuela is as much a Caribbean country as it is a South American one. Parts of its shoreline could easily be mistaken for that of some paradisiacal Caribbean island, and at night the discos in Caracas come alive with rhythms from all over the Caribbean. If you looked under the earth, you might easily mistake Venezuela for an oil-rich Arabian country. The oil reserves are so vast, in fact, that from time to time engineers and surveyors drill in the wrong place by mistake, miles away from where they think they should be, only to end up finding oil anyway.

Because of its proximity to the Equator, Venezuela experiences few climatic variations. There are really only two seasons: dry and wet. 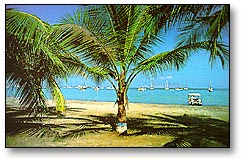 The dry season lasts from December to April, the wet one from May to November. The average temperature is about 27C, but cooler temperatures prevail at higher elevations, especially in the Andes, where jackets are needed